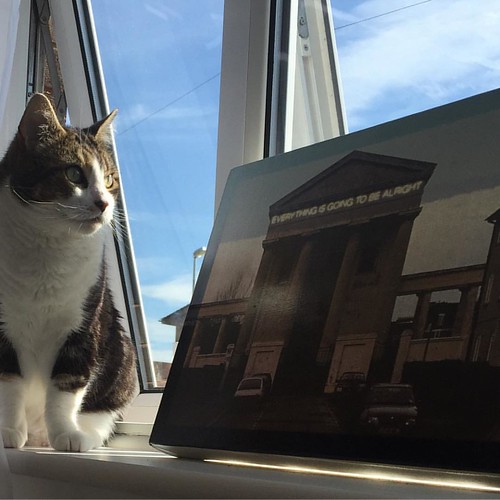 Yesterday I went and sat outside in the yard for a little while and thought about my “sit spot” for my rewilding project which starts tomorrow.

Actually, truth be told, I went outside to bring the washing in, a more mundane activity, but one that’s good hand therapy. Who knew that clothes pegs could be so tough to prise open? Anyone who’s suffered a wrist drop, I guess.

Mabel came up and rubbed her head against my legs and the washing basket. I think me being out in the backyard gave her the courage to come out. She rolled about on the warm tarmac, purring loudly, then started playing with a stone.

I felt sad that I could no longer provide her with an outside like at Oakcroft. She loved Oakcroft. So did I.

She was having such a nice time playing with her stone in the warm sun on the tarmac though. She wasn’t thinking about the loss of Oakcroft, she was just living in the moment.

I’d heard a woman with dementia talking on the radio. She talked about how it wasn’t so bad having dementia, you just lost a lot of time. She said she couldn’t remember yesterday, and tomorrow she wouldn’t remember today. But it forced her to live in the moment, and that was a good thing.

It seems like that was my lesson for the day. A reminder to be present, and to live in the now.

I sat for a bit outside on the ledge by the fence, wondering if this might make a good “close to home” sit spot for my rewilding course if I’m too ill to go too far into nature. It’s already taught me one lesson.

After a while Mabel jumped up on the ledge and sat beside me. We stared at the ground for a bit, watching the shadow of my legs swinging against the wall, feeling the sun on our faces.

I ignored the detritus left in the communal yard by my messy neighbours who just moved out. A random collection of rubbish, including an incredibly large amount of tiny balloons. They reminded me of another occasion, one of the parties at mine and AMP’s flat in Glenkerry House, when loads of tiny balloons inexplicably appeared and we called them “tiny ass-balloons” (hyphenation correct). But that’s a story for another time.

I ignored the cardboard box which they couldn’t be bothered to break down and put in the recycling bin right next to it. I ignored the broken bike frame, and the sofa minus it’s cushions. I ignored the dog shit that they didn’t bother to clear up from one of their two Staffie’s. Maybe it’ll turn white if it stays there long enough, like legendary dog poo from the 70’s.

I focused instead on the occasional waft of lavender on the breeze.

A large lavender bush grows unruly in a patch of soil that seems like it was just dumped haphazardly in the corner of the yard by the sheds. It also has some nettles growing there, and some ivy. I put in a tiny stem of mint a few months ago, but I’ve now discovered that the housing association spray weedkiller in the communal gardens. I’m not sure if they spray it here in the backyard too so I’ll determine that before I cultivate this random patch of soil for food and medicine any further.

But that doesn’t affect the lavender aroma.

A seagull squawks above and both Mabel and I turn our heads to look at it. A seagull? In Chester? We’re miles from the sea and the nearest rubbish dump. Perhaps it’s lost.

Mabel decides that’s enough outdoors contemplation for one afternoon. She delicately jumps down, mindful of her arthritic back legs, and saunters towards her route back into the flat, via the recycling bins under the open window of my study.

I pick up my washing basket and follow her, taking the longer route back into the flat through the doors. My lumbering gait requires monumental effort, even to go this small distance. The physios still aren’t showing any interest in helping me with my foot drop recovery.

A short while later, when I’m doing the washing up, I notice a money spider abseiling down a thread from my hair to my shoulder. Some childhood reflex makes me grab the thread and rotate it three times around my head, wishing for money.

I’ve been channeling abundance and wealth so perhaps this was a reminder, a little wink from the Universe, to say that she hasn’t forgotten.

Maybe she was saying, “Go outside. That’s where you’ll find wealth and abundance.” I was hoping for something more material at the moment as circumstances are rather dire, but I’ve learnt not question gifts from the Universe.

I do plan to use my time outside from my “rewilding” to do some nature writing. So it could have been a gentle nudge from the Universe, encouragement that I’m going in the right direction after all, for both material and spiritual wealth and abundance.

After it’s thrice turn around my head, the money spider didn’t return. I felt bad. Did I throw it off into oblivion with my selfish desire for wealth?

A few moments later I felt a tickle on my cheek, then saw the money spider resolutely abseiling down onto my shoulder again. This time I let it finish it’s descent and go on its way.

This website uses cookies to improve your experience while you navigate through the website. Out of these, the cookies that are categorized as necessary are stored on your browser as they are essential for the working of basic functionalities of the website. We also use third-party cookies that help us analyze and understand how you use this website. These cookies will be stored in your browser only with your consent. You also have the option to opt-out of these cookies. But opting out of some of these cookies may affect your browsing experience.
Necessary Always Enabled
Necessary cookies are absolutely essential for the website to function properly. This category only includes cookies that ensures basic functionalities and security features of the website. These cookies do not store any personal information.
Non-necessary
Any cookies that may not be particularly necessary for the website to function and is used specifically to collect user personal data via analytics, ads, other embedded contents are termed as non-necessary cookies. It is mandatory to procure user consent prior to running these cookies on your website.
SAVE & ACCEPT